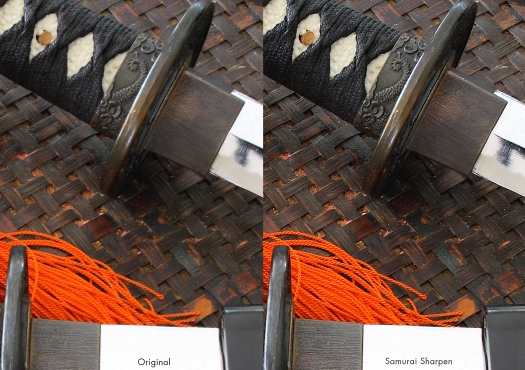 I’ve known Jim Tierney of Digital Anarchy for over 1o years now – I see him at least once a year at NAB in Vegas in the famed Plug-in Pavilion. I’ve always admired his work, and now after all these years, we’ve found an opportunity to work together.

Digital Anarchy has become well known in the post production community – not only is Jim a fixture at events and user group meetings, his software tools are, well, impressive. He tackles real problems, with laser focus and intelligent approaches to the minutia problems that, while on a larger scale may not seem like big issues, actually drive editors crazy. But not only that, he has an appreciation for creating beautiful imagery. And at the heart of it, that’s what many of his software tools are about – making beautiful imagery.

And this week he and his crew at Digital Anarchy have done it again. This time, focusing on video sharpening with an aptly named new product, Samurai Sharpen for Video. Here’s an excerpt from the press release:

The built-in masks allow editors and colorists to apply specific focus on areas within the video for sharpening, while avoiding sharpening dark, shadow areas and bright, highlight areas.This allows for maintaining pristine image quality throughout the shot. The edge-aware algorithm provides another level of masking by restricting the sharpening to only the significant details you choose; for example, enhancing details of an actor’s eyes while preventing areas like skin from being affected.

Samurai Sharpen delivers additional features that allow precision control over how the sharpening affects the look of the footage. Editors can now control the overall strength of the effect, and can adjust the light and dark sharpening halos individually, providing the precise control needed to create effective, but subtle, sharpening.

To learn more about Samurai Sharpen for Video, check it out here.

What are you talking about?!